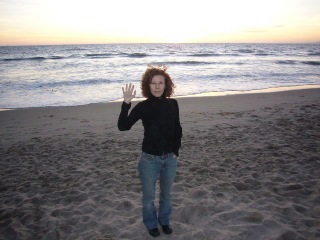 How we meditate self is much our relationship and trust in the encounter of texts. Amy Gerstler is a poet of, “obsession … delightful, limber, punning lyrics of old musical comedies recordings.” Those which “[her] mother owned [and] made [her] want to become a writer.” She is a student of, “fiction, nonfiction, hybrid texts and antique writings … neurology and psychology … diagrams and maps, and ghost photos … an equal opportunity thief … without prejudice.” She dreams to better learn, “writer,” “teacher and person.” And to also to, “Spanish,” “zoo,” “[lift] weights,” and “write more standing up.”

In this interview we talk to trees, “about mortality, and what happens after death.” She states, “All sentient beings might need courage to talk about, think about and/or face the idea of their eventual non existence.” This is tensioned to the “semi immortal …. (incorrect) blithe perception that … mortality has nothing to do with [us].” We confront, “pride, the dominance of ego, how hard one’s sense of self importance dies, and how we are all the center of our own universe(s), no matter how others may see us, or even be blind to our “personhood” and sense of self.”

Amy Gerstler’s most recent books of poetry include Dearest Creature, Ghost Girl, Medicine, and Crown of Weeds. Her book of poems Bitter Angelreceived a National Book Critics’ Circle Award in 1991. Her work has appeared in numerous magazines and anthologies. These include The New Yorker, Paris Review, American Poetry Review, several volumes of Best American Poetry, and The Norton Anthology of Postmodern American Poetry. She teaches at University of California at Irvine.

1.) What were the first inspirations that made you desire to become a writer? Who are your favorite writers and how did they change over time?

2.) Who have been the creative inspiration / mentor writers in your career?

One way people have really helped/mentored me in my life as a writer is by giving me jobs! I just wanted to mention that at the outset, and blow a kiss to anyone who has given or helped get me employment. Dennis Cooper is a literary mentor who changed my life early on in amazing, radical and permanent ways, and I will be processing his intellectual and artistic influence for the rest of my life, I hope. I was very fortunate to have met him at a formative time. David Lehman has been incredibly helpful and generous to me and taught me a huge amount about poetry, much by example. The late Judith Moore was fantastically kind to me as an editor. The playwright Brighde Mullins has been super supportive and an is an inspiration as writer and person. The writers Bernard Cooper, Dinah Lenney and David Trinidad have been among a few valuable writer-friends who teach me important things about writing, reading and being a teacher all the time. The poet Michael Ryan has been ultra generous and I am lucky to be able to learn from him currently. The late Liam Rector gave me the opportunity to teach in the Bennington Writing Seminars, for which I will always be grateful. Benjamin Weissman sets a great example as fierce fiction writer and artist. Brian Tucker opened my mind to the world of comics and graphic novels, no small thing.

3.) How has your own work changed over time and why?

Don’t know if I am the best judge of this currently or ever. Now especially I might not have enough distance to weigh in on this with an accuracy because I’m at a juncture in life when I desperately want my work to change and change substantially. I think maybe the work has gotten more obsessed with the concrete, the earthly, and with loss, or with different kinds of loss than earlier and I have become more interested in sound effects and working with elements of hybrid genres.

4.) Have you been influenced by different genres, and if so how?

YES! Fiction, nonfiction, hybrid texts and antique writings of all sorts are source material for me. I love the so called “lyric essay” and essays generally. I love writing on science, especially neurology and psychology, animals, foreign language dictionaries, and old reference and classification books of all sorts, diagrams and maps, and ghost photos, which in their own ways seep into the writing. A collagist at heart, I am an equal opportunity thief, and steal lines without prejudice from across genres.

5.) What are your plans for the future?

To try to become a better writer, teacher and person. To learn Spanish. To update my research skills. To learn to mediate. To do an internship at the zoo. To start lifting weights so perhaps my arms will look less toothpick-ish. To get a website. To write more standing up.

6.) What are your views on writing by women as it has occurred in the past twenty years?

Women from all over the world are writing amazing literature in all genres. It’s a great time to be alive in that way. One example is the fact that lavishly talented African women novelists are getting published right and left lately which is exciting and inspiring and one wants a great deal more reading time to keep up.

7.) The poem ‘Bon Courage,’ is enchanted. Agile wisdom presents a theater of darkness sans melancholy. We read, “Why are the woods so alluring? A forest appears / to a young girl one morning as she combs / the dreams out of her hair. The trees rustle / and whisper, shimmer and hiss. The forest / opens and closes, a door loose on its hinges, / banging in a strong wind.” This fairytale-y drapery presents danger in a simple unthreatening scale, seeming to welcome possibility, expansion, glitter, and exploration. The girl in the poem rests her body on the forest floor listening to the trees post–modern a chaotic discourse. The girl seeems to grace beyond her years: “The girl / feels her hands attach to some distant body. She rises / to leave, relieved these trees are not talking about her.” How do you see the messages of the trees differing from the girl’s self-voice? What is the meaning of this title?

Not that what I was thinking of when writing this is the “correct” interpretation of the poem…hopefully the poem is open to various readers wandering around in it and coming to their own multifarious and idiosyncratic conclusions…SO, that said, in writing this poem, it seemed to me that the trees were talking about mortality, and what happens after death. All sentient beings might need courage to talk about, think about and/or face the idea of their eventual non existence. The three trees in the poem are horizontal, they’ve fallen or been knocked down and so they’re on their way out of this world. But trees break down slowly, more slowly than humans do, so they have plenty of time to experience and think about their passage into nothingness. The girl is young and healthy and still at a stage where she feels relatively sure of her body and semi immortal, so it’s her (incorrect) blithe perception that the trees’ conversation centered on trepidation about mortality has nothing to do with her. She has the blind courage of the young. The title is a French expression which means “take heart” or “buck up” or “be brave,” something consoling like that.

8.) “Womanishness,” is a poem that pokes at lightly powered notions of sexism and how the mind is contextualized in the body. We begin, “The dissonance of women. The shrill frilly silly / drippy prissy pouty fuss of us. And all the while / science was the music of our minds.” Flesh connects extensible to the threatening music of the body. Continuing, “Our sexual / identities glittery as tinsel, we fretted about god’s / difficulties with intimacy, waiting for day’s luster / to fade so we could slip into something less / venerated.” Believe in the head bro GOD here extracts the veneration of body. This excludes music and the sacred. At the end of the poem the speaker says, “Hush, hush my love. All these things happened / a long time ago. You needn’t be afraid of them now.” How do you see these notions evolving? They are ever present, but the speaker has no anger, please elude to this poetic choice? When our identities align with our sexual ones, where does this presently place us? How do you see this aligning differently along gender?

Again, this is just my take…. but to my way of thinking, Womanishness is a slightly arch poem about sexism and gender, and language relating to same, and what gets handed down from generation to generation re: these topics. Hopefully it’s a somewhat playful poem. I wrote it partly out of surprise after several female students at an art school where I used to teach stated that feminism was totally outmoded and unnecessary because men and women are now completely equal. I am still reeling a bit from that conversation, still puzzling over it, and over the gap between these intelligent, likable younger women’s perceptions of the current state of gender equality in the US and mine.

9.) In your poem, “A Terribly Sentimental Fork,” humor is aware of itself. It is not ignorant, purposefully mimicking power structures in thought and syntax to disrupt, present sign / signifier relationships. As evidence, “Human mistreatment / of their best inventions / led this still-handsome fork / (my classic pattern’s / known as Acanthus / or Aegean weave) / to be employed prying up old linoleum. Forks are mentioned / six times in the bible!” The fork admits the mistreatment of invention, inviting us to lay in the grass with the original. In the end the fork dismally states, “Yet my fate / is shame. As if pitched here / by some tantrum-prone / god, I’ve lain for days / in the grass where / I was flung.” Can you please describe why the reconfiguration of the scheme brings us back to the pattern of the grass and how the fork and the self in body have been neglected by the ideology of Western tradition? How does invention participate in this discussion?

For me, this poem deals with pride, the dominance of ego, how hard one’s sense of self importance dies, and how we are all the center of our own universe(s), no matter how others may see us, or even be blind to our “personhood” and sense of self.