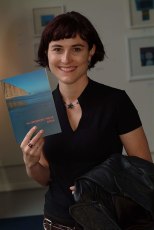 Bio: Laura Solomon (28 June 1974 – 18 February 2019) was a New Zealand / British novelist, playwright and poet. Best known as a novelist, her poetry and short stories have also been widely published and short listed for awards and prizes.

I wrote this tribute a year ago, but never published it. Today I felt was the correct time. I hope to start new interviews shortly. Interview is in original form edits are placed in ( ).

…. There was a woman who inquired about an interview from me months ago. Her name was Laura Solomon. Laura had inquired about giving me an interview about five months ago. She emailed briefly I had reached out to her previously, but she had just undergone brain surgery. I was going through multiple surgeries with my hand and all other previous issues mentioned and so politely put her off to what seemed a little pushy. It was not until yesterday (Feb 25 2019) I realized her pushiness may have been because she was considering or in the midst of approaching her next step. She died on the 21st of February, 2019 from a brain tumor. I have not written an interview for three (now four) years. I agreed to the interview just asked her to give me some time. They are still (were) sitting in my inbox. She published another interview that I read yesterday that stated “winning”. The picture on the front pictured her with a yellow backdrop hot magenta lipstick and sunglasses. Obvious contradictions of her recent departure.

This was at the same time of the recent Nike commercial that is all about women empowerment in sports. I like the commercial, and the mind behind the activity is obviously intrinsic to any talent, but yet again western society was projecting women as of the body. This made me observe how trapped Laura may have felt observing her life limit just as I thought I may never get to play music again. Also the horror of surgery is really unbelievable and only talking through metaphysics or surreal landscapes that I think I could get to which I haven’t really approached yet and would be more of a surreal poem. Maybe something do with living in a war zone and plastics and empty air. But as I read her work things seemed to be very straight forward. I assume that is also her type of aesthetic. I also wondered if the reason she reached out to me and her death was a coincidence or acceptance.

In her poems she describes a love relationship where she hands her MRI scan along with a book on topography to a new lover. She also admits that if she was God she would judge her. Wanting needy self indignant. I noticed the whispers that were coming from these confessions were like songs of the oral traditions of poetry where poets would recite their messages out loud to one another as they were more easily hidden. In a way she was singing a song over her own ending. Is this same impeding knowledge of one’s death as near change a person’s perspective? Is this similar to the feeling of one at war? Domestic violence? (virus?) Yes.

What if you know that as she puts it “your brain is being eaten either way?”. And was her attempt to as she says “at living forever/ My long shot at immortality?”. She replies to her rhetorical inquisition with this: “if you take the time to listen. I still alive. In the selection that she picks from her novel.  _____________ we then travel to heaven with famous celebrities mocking their shocking demise. For example Kurt’s blown brains, Marilyns overdose. A common theme of suicide. The poem is called “The Party” and as readers we are informed that everyone has to be invited to the party. The last line of the poem which is the last that she sends to me is, “The black telephone rings./ I move to answer it,/Nobody is there. /I can hear the 22 century heavy breathing down the line.” To see the future as this black is representative of not only cancer in the brain, but cancer in humanity. Brave enough to look at her own truth, but also in a despairingly difficult way.

When I visited her Facebook page the family announced they were thankful that she did not take her life. The metaphysical progression of this interview and this meditation remind me that there is rediscovery and different realities and I am thankful to be participating here in it. Also that there is much work to be down while we are here so that Laura’s foreshadowing is not correct.  After all this I listened to this image and I could not help but falling in love with the partially heard correct line: paper boat. watermelon. Probably the kindest image I could imagine as a healthy brain.

*note : this passage has not been altered in any way from the original except for the ( ) given which is also why the dates may vary. laura & I we’re speaking up till a few weeks before she passed & I wrote this as her wish .. her space in this space is in honor of her & her work. please look up her webpages as you can still read most online. 🙏