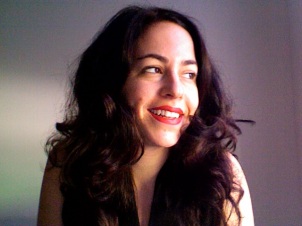 In this interview, writer Sabrina Orah Mark encounters alterations of the unknown; simply put “gigantic” notions of change. She states, “I cannot boil such a thing down.” The future mistake, thinking as she says is, “bright blue with two very attentive, yellow feathers.” It is a stranger’s white print, “shy, uncertain, and nameless.” We articulate the architecture. Sometimes we are “nameless,” shut in closets with favors. Sometimes we are gentle contours of foam flesh; we shift the syntactical rips.

As Mark transposes, form syntactically blends blueprints of identity. She shares, “I wait a lot for my turn to come, and when it does I go in search of another line. Another sentence to be alive inside. I think if I one day looked up and the sentence (line) was numbered I’d be totally horror struck.” It is important to play with the confines of a mark. We make peace with our vulnerability; we become visible and honor our “lifeline[s]”. Lifelines become another, “rescue,” a blown kiss to, coffee with “fate,” and ultimately, a “[wish], somewhere along the line, to be heard. And also to be seen. If only for a moment.”

Sabrina Orah Mark grew up in Brooklyn, New York. She earned a BA from Barnard College, Columbia University, an MFA from the Iowa Writers’ Workshop, and a PhD in English from the University of Georgia. She is the author of the book-length poetry collections The Babies (2004), winner of the Saturnalia Book Prize chosen by Jane Miller, and Tsim Tsum (2009), as well as the chapbook Walter B.’s Extraordinary Cousin Arrives for a Visit & Other Tales from Woodland Editions. Mark’s awards include a National Endowment for the Arts Fellowship and a fellowship from the Fine Arts Work Center in Provincetown, Massachusetts. Her fiction is forthcoming or recently appeared in American Short Fiction, Gulf Coast, The Journal, and in the the anthologies, My Mother She Killed Me, My Father He Ate Me: Forty New Fairy Tales (Penguin) and Poets on Teaching (Iowa University Press). Her poems have been included in Best American Poetry 2007 and the anthology Legitimate Dangers: American Poets of the New Century (2006). She has taught writing at Agnes Scott College, University of Georgia, Rutgers University, University of Iowa, John Jay College of Criminal Justice, Goldwater Hospital and throughout the New York City and Iowa Public School System.

1.) What were the first inspirations that made you desire to become a writer? Who are your favorite writers and how did they change over time?

Silence, My Very Nervous Family, Myopia, My Brothers, Caves, The Middle Of The Night, A Boy With Three Names, Agony & Ecstasy, Basements, Yeshiva, Little House On The Prairie, The Oldest Animal, Rabbis, The Cottage, And Also I Saw Things.

2) Who have been the creative inspiration / mentor writers in your career?

There have been these teachers: Robert Hass, Claudia Rankine, Yosef Komunyakaa, Dean Young, Jim Galvin, Mark Levine, Kenneth Koch. And there have been these poets and writers who are friends (some from long ago, some now, but always here). Their words sling me over their shoulder and carry me around: Amber Dermont, Oni Buchanan, Thomas Heise, Tim Earley, Kirsten Kaschock, Matthew Shindell, Eduardo Corral, Danielle Pafunda, Kristen Iskandrian, Michael Dumanis, Heidi Lynn Staples, Sarah Messer, and John Woods. And my husband, Reginald Mcknight, who is – as they say in the forest (as the highest compliment) – “all the trees and all the animals.”

3) How has your own work changed over time and why? Lately my poems seem to be bursting out of The Poem. Now there are pieces of bone and scraps of cloth everywhere. I sweep all the time, but it doesn’t seem to make any difference.

4) Have you been influenced by different genres, and if so how? Other than poetry and fiction, I have been influenced by That Mutter and That Fodder. For a long time they seemed so different from each other. Now, it seems, their accents are eerily similar. The cord, shorter than expected.

5) What are your plans for the future?

I have stared at this question for about three days. Turns out, when I stare at something long enough branches start sprouting from its head. In other words, this question has turned into a tree I am too afraid to climb. Scared of heights. Vertigo.

6) What are your views on writing by women as it has occurred in the past twenty years?

I cannot boil such a thing down. It would leave the kettle dry, with maybe some teeth at the bottom. I will not pretend to know those teeth. I barely know the ones in my own mouth.

7) Who are promising women writers to look at in the future?

8) If you were asked to create a flexible label of yourself as a writer, what would it be?

A flexible label? Labels, in general, are a bad idea. I once found a slip of paper affixed to the bottom of my foot. Though I am certain one of the words contained the letter “O,” I never was able to make out what the label read. This was a huge relief.

9) In the poem, “Don’t Just Do Something, Stand There,” we encounter a list: “58. There are stains that happen suddenly, and can never be washed out. / 59. ‘And if they could?’ / 60. ‘We would be saved.’ / 61. ‘For god’s sake,’ said my mother, ‘Mr. Horowitz, your lover, was just joking around.’ 62. Speaking of jokes, let me tell you a joke I once heard at a funeral. / 63. His wife had died young and he told the joke at the funeral because she loved the joke, every day she loved the joke, and now he had to live a life he couldn’t bear to live without her so he told the joke.” The joke here is used to displace the suffering. The characters metaphysically shift out of their positions in the stories to critically stimulate discussion. This incorporates change and agency, the characters at once become the fool of their folly and the vehicle for their growth. I am interested why you chose to place these dynamics in the form of a list. How does this affect the internalization of the message in both the reader and the characters?

I like what you say about this form, how it becomes “the fool of their folly” and “the vehicle for their growth.” The list, especially numbered, feels nerve-wracked to me. Often, I stand on lines I believe I must stand on. Lines for bread and eggs and milk. I stand in line to board the airplane. I stand in line for a book to be signed by a favorite poet, for a map of the museum, a blood drive. In this way I am part of one gigantic sentence. We all are, no? I wait a lot for my turn to come, and when it does I go in search of another line. Another sentence to be alive inside. I think if I one day looked up and the sentence (line) was numbered I’d be totally horror struck. Like, what would #87 mean? This is why I numbered the lines. “Don’t Just Do Something, Stand There” is, in many ways, about vulnerability and death and being replaced and waiting on a line that is really a lifeline (which suggests both rescue and fate) and it is about wishing, somewhere along the line, to be heard. And also to be seen. If only for a moment.

10) We are asked to interpret the mistake as it is exceptionally personified in “The Mistake”. The poem evaluates the linguistic hierarchical relationship of sign and signifier. Usually the mind (I, sign) places meaning on the (object/subject, signifier). In this bend of linguistic structure “the mistake” can only be a mistake as it is interpreted from the receiver. We converse: “’Oh, look,’ exclaimed Beatrice, ‘it’s communicating!’ ‘Is it alone?’ whispered Walter B., taking Beatrice’s hand. ‘Yes,’ Beatrice whispered back, ‘I think it is alone.’ But it was not alone. It was not alone at all. Others began to emerge. Some from the trees. Some from the grass. Their damp white mouths flashed in the sunlight.” In the beginning of the poem, the main characters want to kill “the mistake” because it is different. Can you describe how the tradition of our ordered thinking is placed in a logic of deduction? Is this thinking futile? Must we instead, as the poem intimates, step into the position of the signifier, “other,” or “mistake,” and believe in change versus contractual linear pathos as the original supersedes?

I showed Beatrice your question. She thought it was very beautiful, and brought it to the milliner who turned it into a hat she now wears on special occasions. The hat is bright blue with two very attentive, yellow feathers. This is how deeply she favors “change” to “contractual linear pathos as the original supersedes.”

11) “The Oldest Animal Writes a Letter Home,” is just that, a letter written by the “oldest animal”. The letter assumes an accent reminiscent of old English oral spellings of speech. The speaker is lyrically enhanced by the melopoeia of the meaning more than the traditional formulaic linear line. This in turn asks the reader to listen to the music of the line as intrinsically as the meaning; cascading between virulent stokes of “wynds and,” “byrds”. Can you explain how the use of oral speech and spelling disrupts linearity of language and how this affects communication?

I do not like to say too much about The Oldest Animal. Just this, for now:

a)The Oldest Animal may be born out of all the secrets Walter B. and Beatrice keep from themselves.

b)The Oldest Animal suffers the consequences of Beatrice’s worst crime, but in exchange for its suffering it is given the ability to speak/write in a “transcendent” language.

c)They will never send the byrds.

12) The poem, “The Ten Stages of Beatrice,” provides a social commentary. In stage number one: “Belonging” Beatrice disentangles any feelings of “fear,” or “nostalgia,” instead responding with complex graphs. Stage number two: “Happy” which can only exist with an audience. Stage three: “Walter B.” she relates to her relationship as the most “strange”. Four: “Romance” here she is “hunted,” “deceived, “words rarely interesting,” and she receives gifts that have no use. The Fifth stage: “Dread” she thinks she is a nest. Six: “Slice,” she will eat cake until she has “visions”. In the seventh stage: “Cryptozology” which involves “Happy” mixed with a green dress and she achieves “ecstasy”. Stage eight: “Crowded,” is blurred by humans. Stage nine: “Poland” and grandfather and sound. And finally stage ten: “Return,” where she watches herself feed babies with a gardening tool. The feminine reascribes the stages of grief (or rather any human process in list form) within its historical model. The effect comments on gender norms and how they manifest in society. Beatrice seems to be disconnected from all of these elements that are in fact every part of “her”. Is she always affected by these stages, how in your opinion does she affect these stages?